photos by Christopher Erickson except where noted https://www.flickr.com/photos/dragoniching/albums/72157664343053772

The popular “Doctor Who” convention, Gallifrey One, had its 26th edition on February 13-15, 2015 at the Los Angeles Marriot. The show was packed with celebrities, costumes, panels and fun. 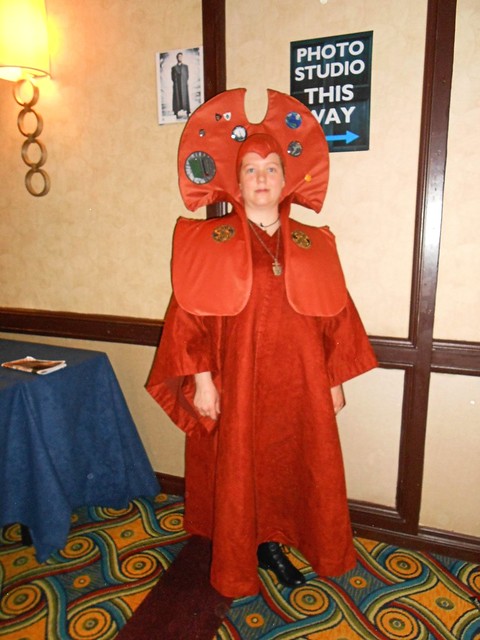 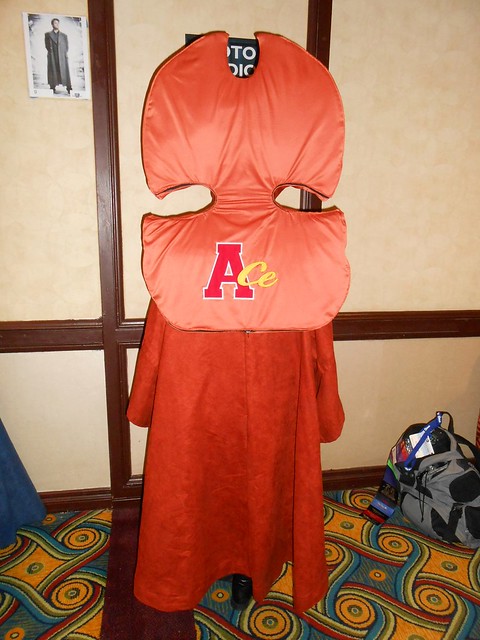 Even though there was no Doctor at this year’s convention, there were still plenty of stars. The main stars were members of the “Torchwood” cast. There were also companions from the classic era including Janet Fielding (Tegan), Sophie Aldred (Ace), Carole Ann Ford (Susan Foreman), Frazer Hines (Jamie McCrimmon) and Wendy Padbury (Zoe). Dan Starkey (Commander Strax) and Nichelle Nichols was also featured guests. 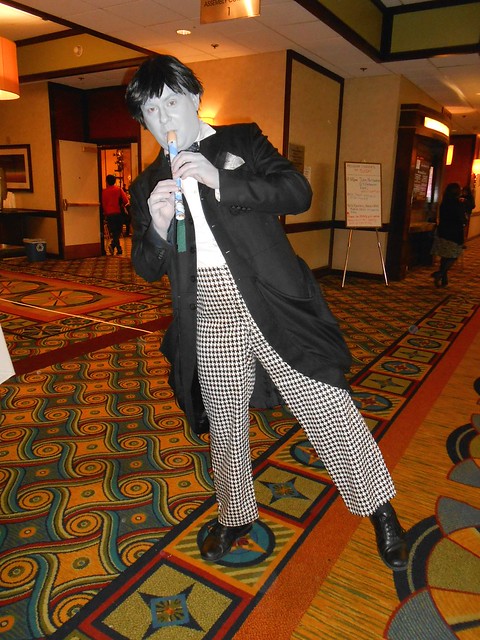 The amount of panels is amazing. For a small convention, they offer a huge variety of subjects including costuming, related media like audio plays and comic books, a video room and panels on non-”Doctor Who” shows. The first panel that I attended was a read-through of the upcoming “Inspector Chronicles” movie. 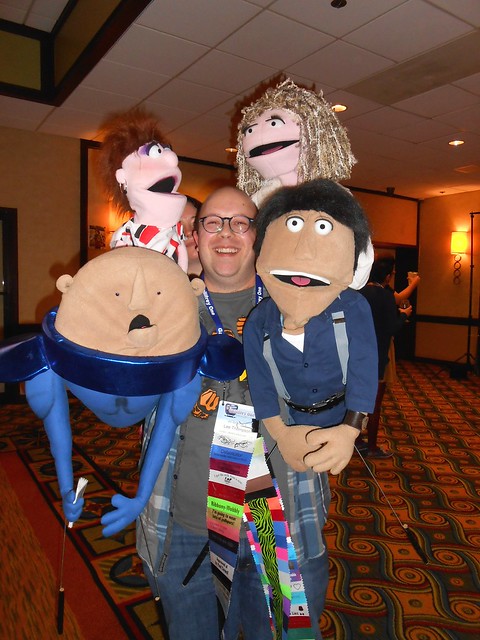 The panel featured stars Travis Richey (The Inspector), Carrie Keranen (Piper Tate), Eric Loya (Boyish the Extreme), Robert Picardo and Chase Masterson. The film fundraiser was announced at a previous “Inspector Spacetime” panel. After the success of the fundraiser, the producers were able to put together a prequel episode that was shown at the panel. The cast then read through the script with the help of several other people. The panel room was packed with fans of the character that was introduced on an episode of “Community” as a “Doctor Who” homage. 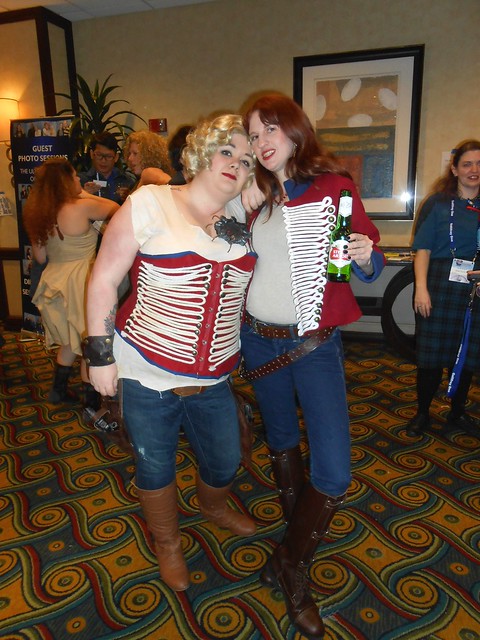 Another panel that I attended was the “Torchwood” reunion panel featuring Eve Myles, Burn Gorman and Naoko Mori. They shared stories about their time on the show including pranks that they would pull on each other. One of the stories involved a prank that John Barrowman pulled involving a prop eye that he kept putting in different body parts and then used to gross out the cast. They also discussed projects they had been working on as well as future projects. 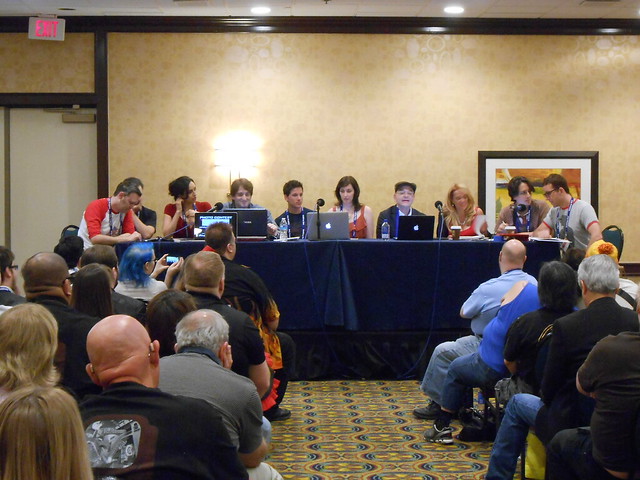 The final panel of the weekend that I attended was the John Barrowman “Anything Goes” presentation. He was alone onstage with an open microphone for people to ask him questions. No subject was off-limits but all of the fans kept their questions fairly clean. He told lively stories about his personal life, his status as a LGBTQIA symbol, his time on “Doctor Who” and “Torchwood” and encouraged everyone to write to the BBC about bringing the show back as the network has to answer every piece of correspondence they receive. 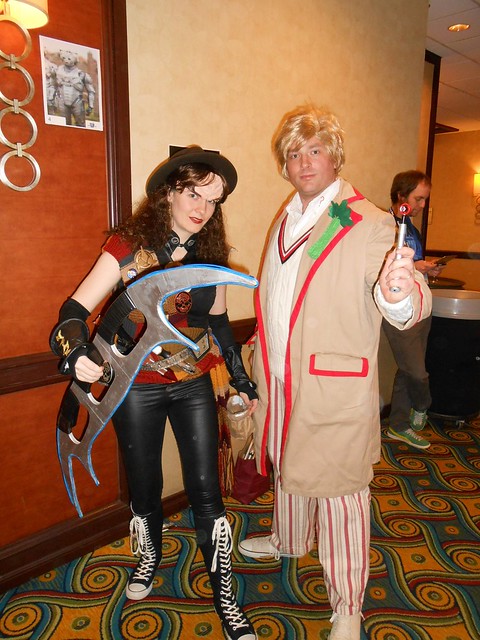 The Masque of Mandragora was the main evening entertainment. There were many entries that delved deep into the vast history of characters from the show. Entrants ranged from different femme versions of The Doctors and Torchwood characters Jack Harkness and John Hart, interpretations of the Dalek outfits in skirt form, Clara Oswald from “Robot of Sherwood,” two Queen Elizabeths from “The Day of The Doctor,” the Minotaur creature from “The God Complex,” a Vashta Nerada from “Silence in the Library,” a Forest of Cheem tree from “The End of the World” and the Menoptera from the First Doctor serial “The Web Planet.” 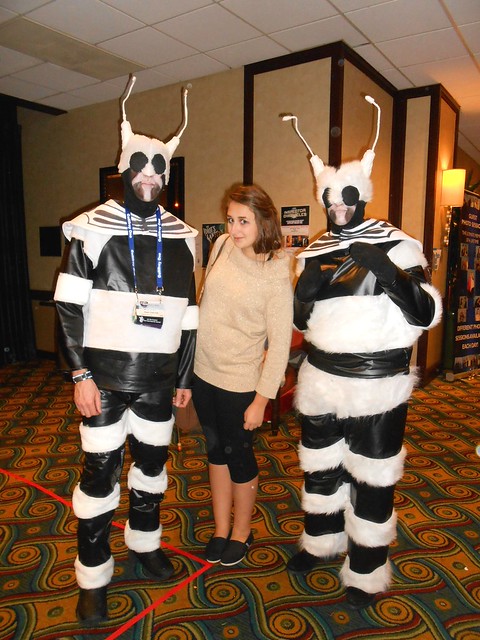 Part of attending the convention is attending the Opening and Closing Ceremonies where all of the guests are introduced on stage. They all make a short speech about what they look forward to (for the Opening Ceremonies) and what they enjoyed about the convention (for Closing Ceremonies). All of the attendees pack the main panel room for both of panels. The other not-to-miss presentation is the Year in Review, where clips of the stars and creative staff of “Doctor Who” on other British programming are shown. 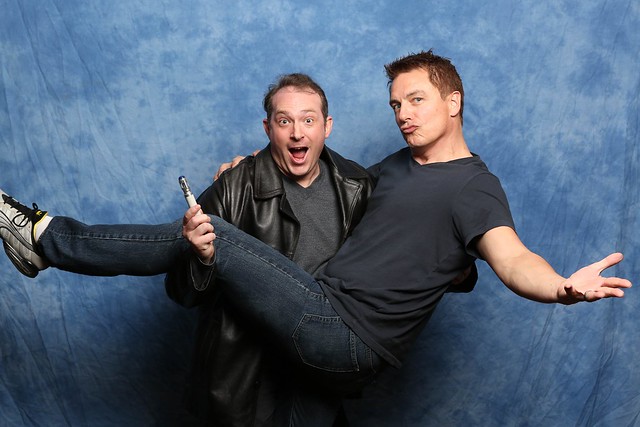 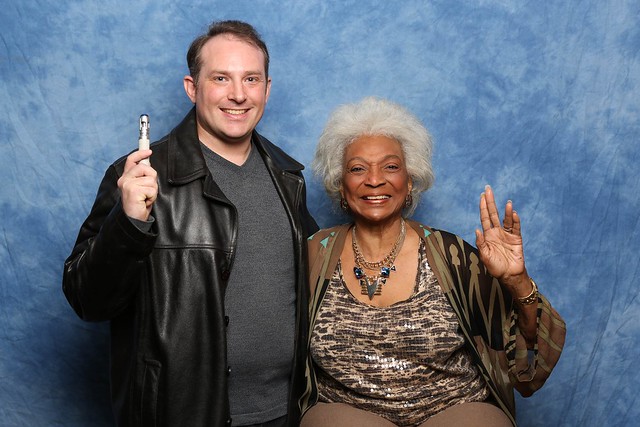 The dealer’s room has lots of “Doctor Who” centric items along with other general science-fiction merchandise. Patrons have the ability to pick up audio adventures of all of the Doctors as well as other shows like “Blake’s 7” or “Sapphire and Steel.” People can also find books, lots of t-shirts, pins, toys, action figures and accessories. One booth had multiple styles of Tribbles for sale. Another booth had Jayne hats from “Firefly” and other knit headwear. 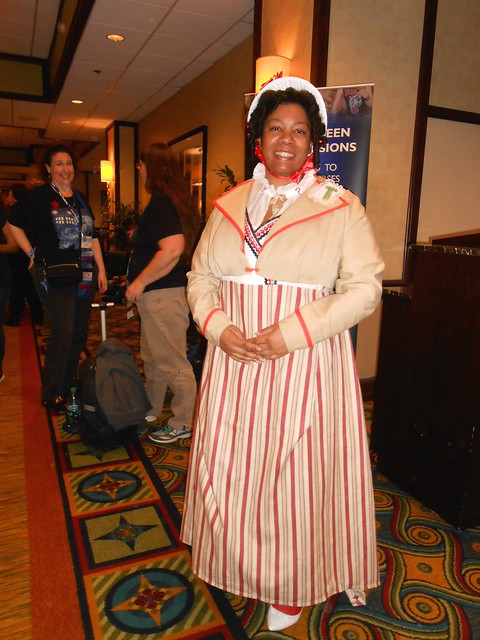 One of my two main purchases was a signed hardcover edition of the “Doctor Who”/”Star Trek: The Next Generation” crossover comic published by IDW Publishing. It featured the Eleventh Doctor and the crew of the USS Enterprise-D facing off against the Borg and the Cybermen. I also picked up the maxi-series, “Doctor Who: Prisoner of Time,” featuring all of the Doctors in the first 50 years. I was able to get both books signed by the writers and artists. 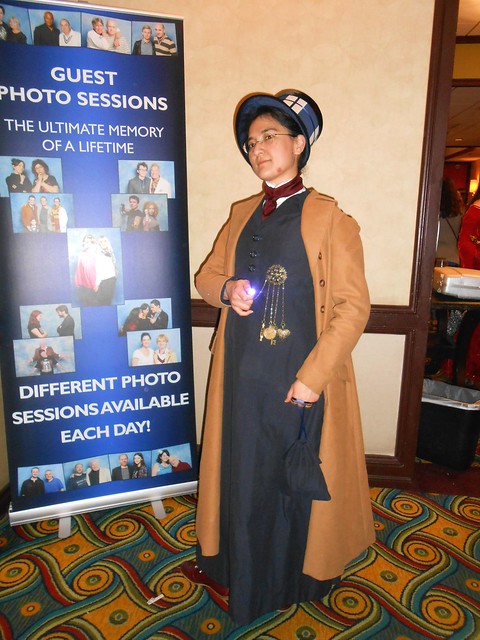 People could also get photos with their favorite celebrities. I got my photo with John Barrowman and Nichelle Nichols. When I posed with my sonic screwdriver, Nichelle Nichols saw it and wanted to keep it.

There were a few other attractions as well. People could pose with a TARDIS and have their picture taken. There was a gallery of costumes and props from “Doctor Who” and “Torchwood.” There were themed vehicles parked outside the patio area including a TARDIS chase and recovery vehicle, a TARDIS scooter and a “Star Wars” car. 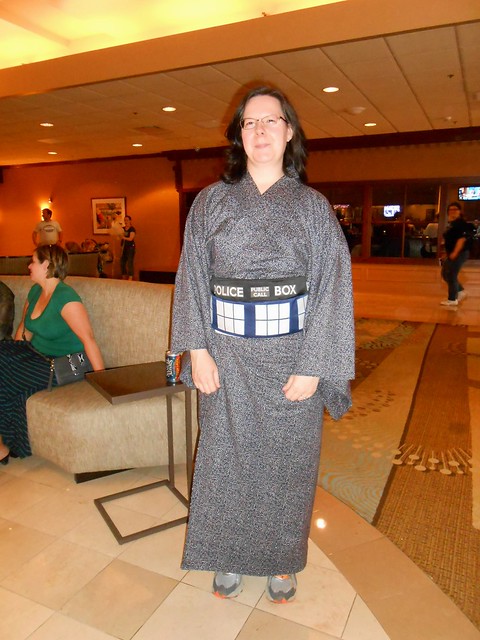 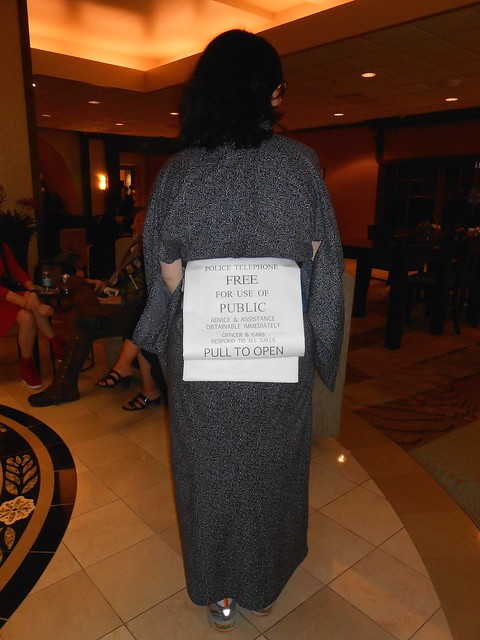 The nice thing about Gallifrey One is that many people who costume don’t always wear a “Doctor Who” related outfit. The convention goers are accepting. There were plenty of other costumes including Marty McFly, Waldo, Chell from “Portal,” Carmen Sandiego, the Little Mermaid, Malory Archer and Cyril Figgis from “Archer,” John Constantine, Willy Wonka, “Star Trek” uniforms, Mary Poppins, Star-Lord and Gamora. There were a few Whovian mashup costumes like a Klingon-looking Time Lord, a Fifth Doctor inspired Power Girl and Regency-inspired femme Doctors. 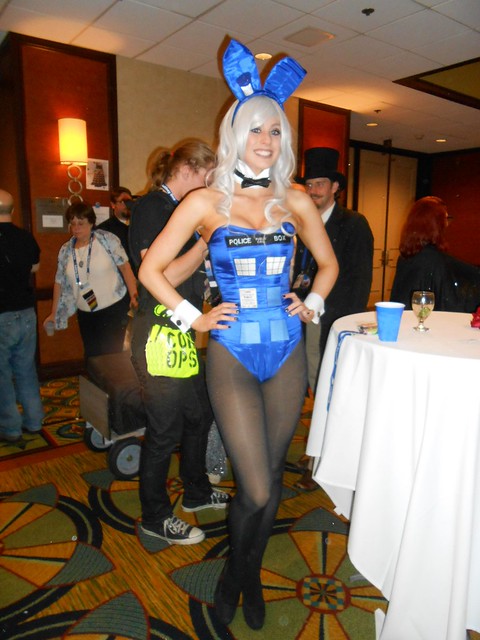 There was a good cross section of both classic and new Doctors with several Fives, a good amount of Twos, a healthy representation of Twelves and a smattering of all the other Doctors. The most impressive one was a Second Doctor made to look like he stepped out of the original black and white broadcasts. There was a Sixth Doctor who was dressed in his alternate blue outfit that is featured on the cover of the audio adventures. 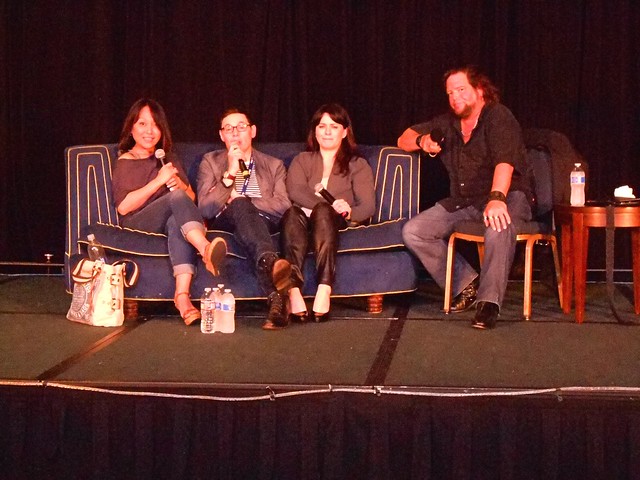 There were several femme versions of various Doctors and Captain Jack Harkness. A number of the companions were well represented. My favorite was Ace as a Time Lord after she had completed the required training. Several people did fashionable versions of the TARDIS including a 1960s style mod dress, a flapper outfit, kimono, Playboy Bunny outfit and flight attendant style uniform. 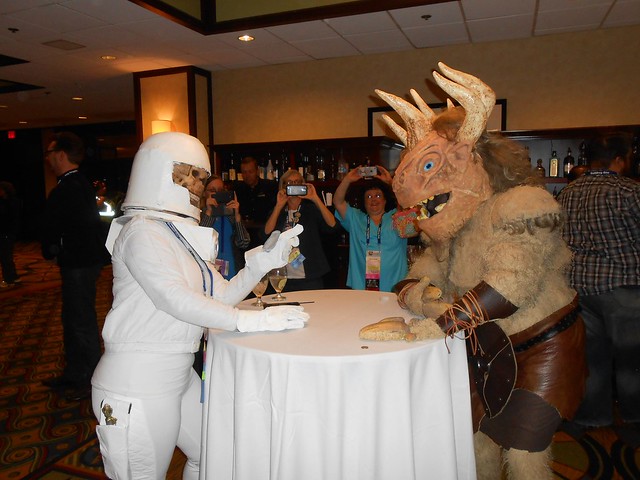 Other supporting characters were well represented. One of the bank robbers from the episode “Time Heist” was in attendance. There were a few Madame Vastras and Jenny Flints. There were a couple of Clockwork Droids from “The Girl in the Fireplace.” There was one person dressed as the classic reoccurring villain The Meddling Monk. There were also villains and monsters like the Weeping Angels, the Silence and versions of The Master and Missy. There was a group that had four puppets of characters of Tegan, River Song, Commander Strax and Captain Jack Harkness. 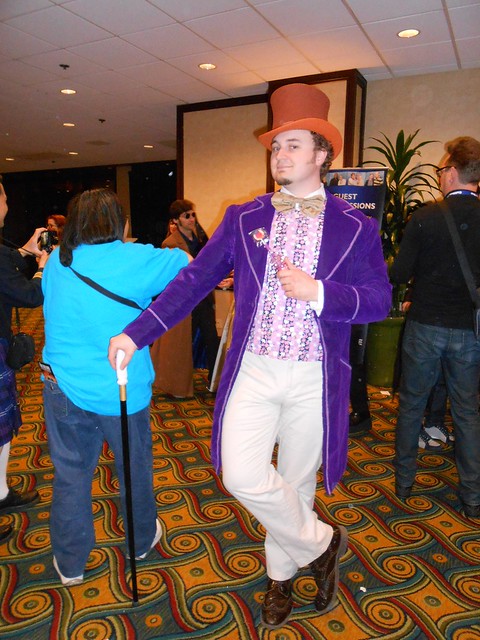 The 2015 version of Gallifrey One had a lot to offer people. It has always been one of the conventions that I look forward to every year.