Steampunk fans descended on the Doubletree Hotel in downtown San Jose on Memorial Day weekend for a feast of music, costuming, dancing, tea and more. The 2015 edition of Clockwork Alchemy was held from May 22 to May 25. 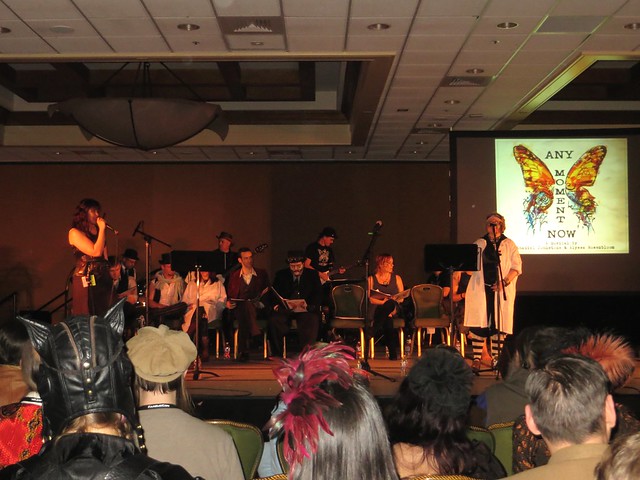 The convention continued to successfully mix different fan activities, which brings in a number of different fandoms. Music is one of the foremost art forms featured with three separate concerts, jam sessions and acoustic sets. Costuming and fashion are also a huge part of the draw with panels, a fashion show and items for purchase in the Artist’s Bazaar. There was plenty of dancing, with lessons for beginner and advanced students to be able to strut their stuff at the concerts as well as belly dance performances. In addition, no steampunk event would be complete without tea. 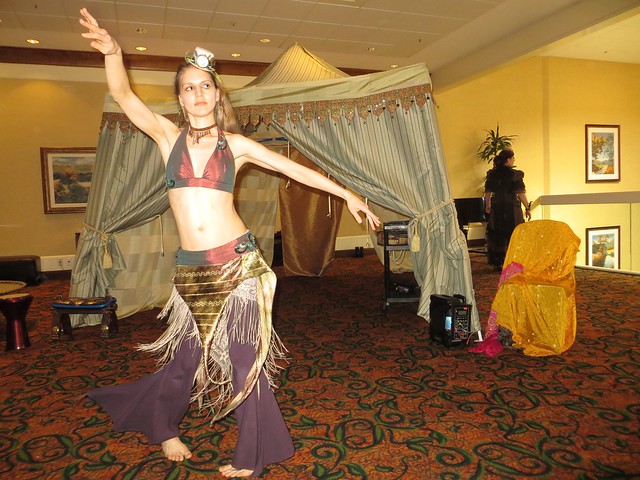 The Alchemist Tea Parlor was visited frequently by both patrons of Clockwork Alchemy and by many anime fans visiting from sister convention FanimeCon. There were many different styles of costumes in the tearoom at one time. You could see characters from “Game of Thrones” at the same time as people in Victorian garb. The parlor had four different blends that offered chemistry in a cup and cookies to consume. The servers were dressed up with tea-themed costumes. To be even more authentic, a boiler heated the water for the tea. To commemorate the tea experience, tea drinkers were given badge ribbons with different phrases for each day. 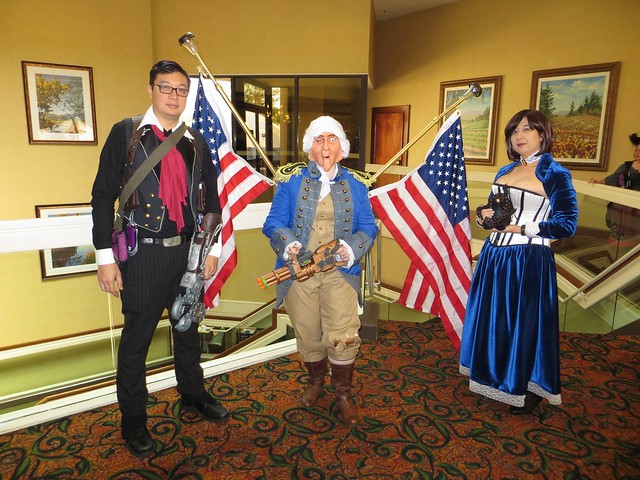 In addition to tea, people could enjoy an entire programming track dedicated to steampunk literature. An author salon was set up for a variety of panels to hear authors talk about writing, publishing, fundraising and reading their works. There were additional panels about steampunk fiction including fairies, comics and trivia. People could also meet authors and guests of honor like Harry Turtledove and Phil and Kai Foglio. There was a book release party. Many of the authors also had tables where you could purchase their books. 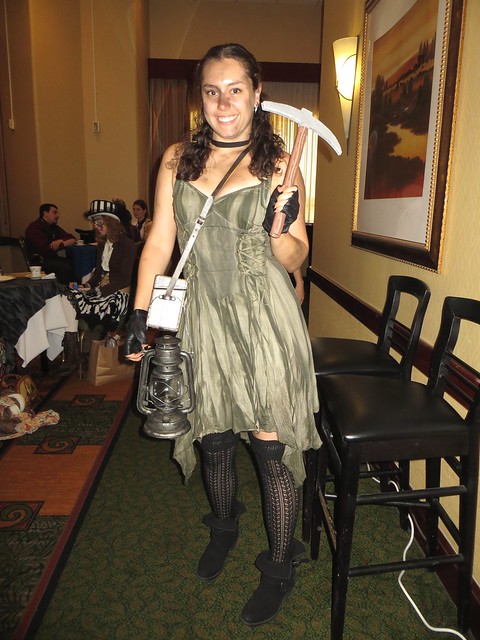 Along with literature, people were able to view different types of artwork at the Artist’s Gallery. There was plenty of different pieces including a steampunk bike, armor and two studies that people could take pictures in. 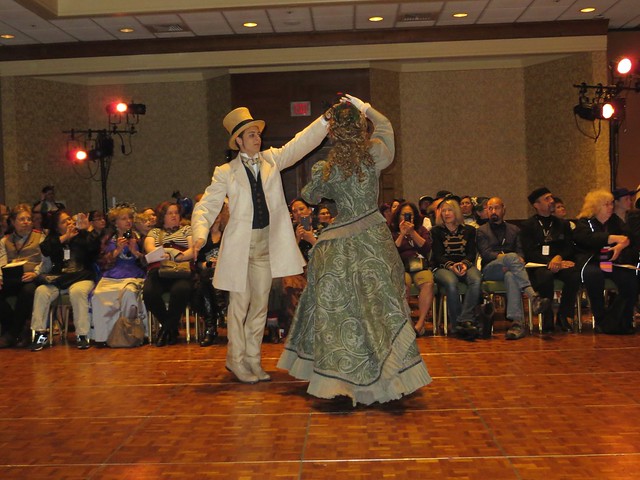 Dancing was also a huge portion of the programming. People were able to take dance lessons for waltz, the Congress of Vienna Waltz, swing, blues and belly dance. People would be able to use those lessons later in the weekend at the music concerts. There was also plenty of opportunity to view belly dancers at caravan tent set up for people to see the performers shimmy, shake, wave scarves and balance objects. 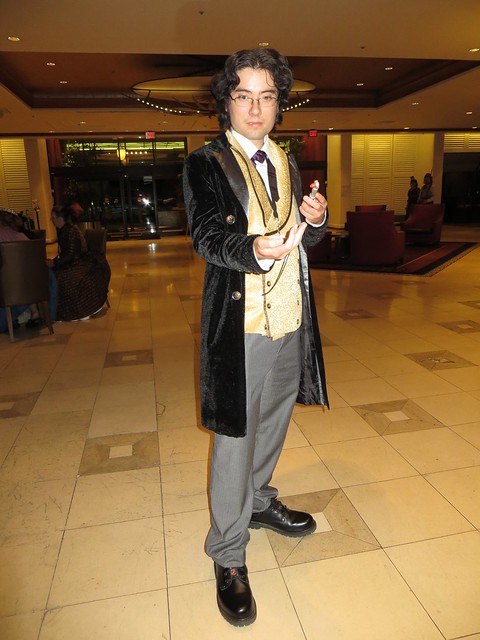 Fashion was a big part of the convention. The Artist’s Bazaar had lots of items for sale including corsets, hats, jewelry, clothing for men and women and plenty of accessories. A number of the items for sale were featured in the Fashion Show. 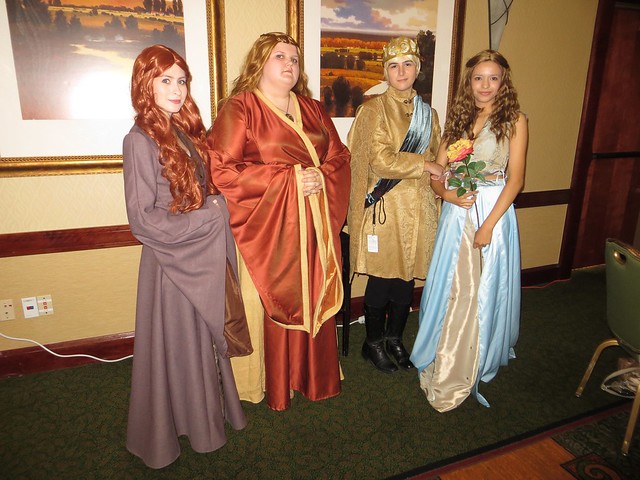 The Fashion Show combined music, theater, dance and fashion. The program pages were bound together using different sewing stitches. Four different designers were featured. Each designer created a line of spring Victorian clothing inspired by an Unwoman song. The presentation of the creations was accompanied by Unwoman singing. The models performed scenes like dressing up or dancing. Unwoman also gave a mini-concert during the show. 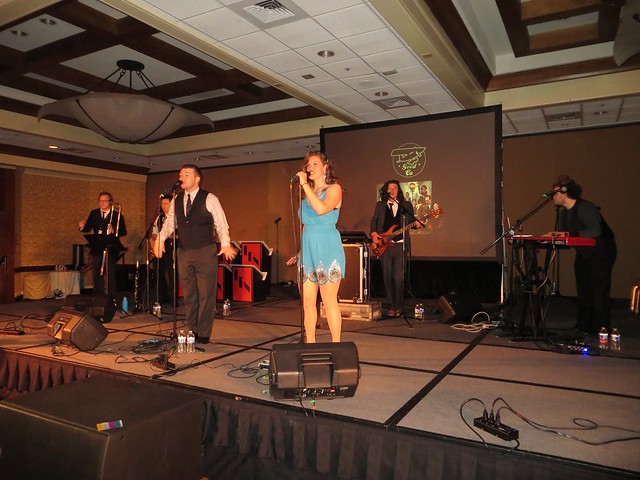 There were several panels on fashion. Several focused on building the basic wardrobe with tips on tying cravats, thrift store shopping, sewing and prop building. Other presentations focused on alternate fashions from around the world during the late 1800s. There were also several workshops where people could learn a new skill. 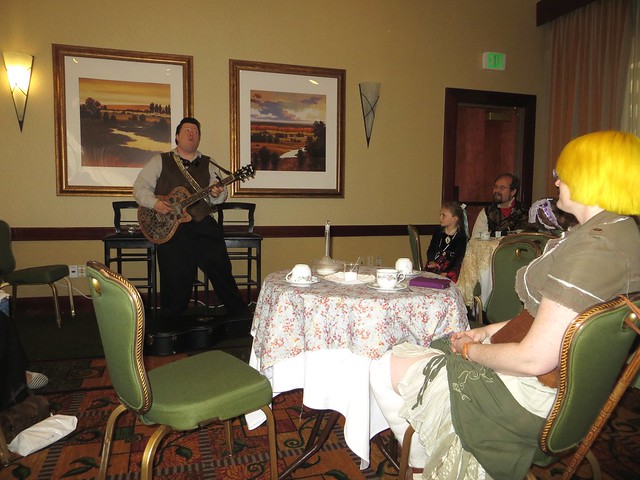 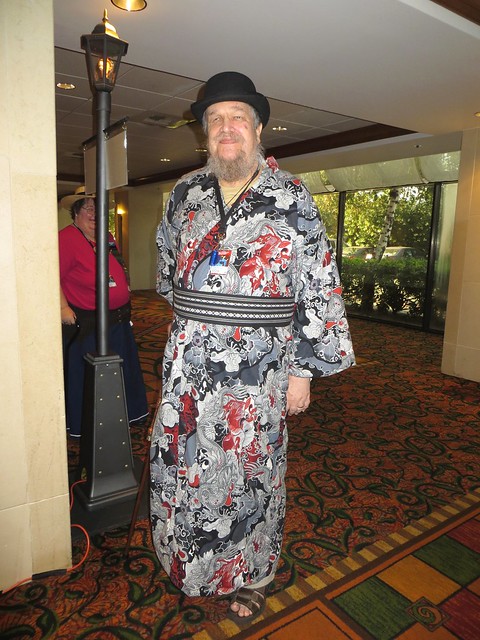 Music was the main link throughout the weekend. There were multiple opportunities to hear music from different artists.  Many of the performers did acoustic sets in an open foyer area. John Sprocket even did an acoustic set in the Alchemist Tea Parlor. Many of the artists performed a jam session like a steampunk supergroup. Patrons could also learn the art of song craft from the artists. 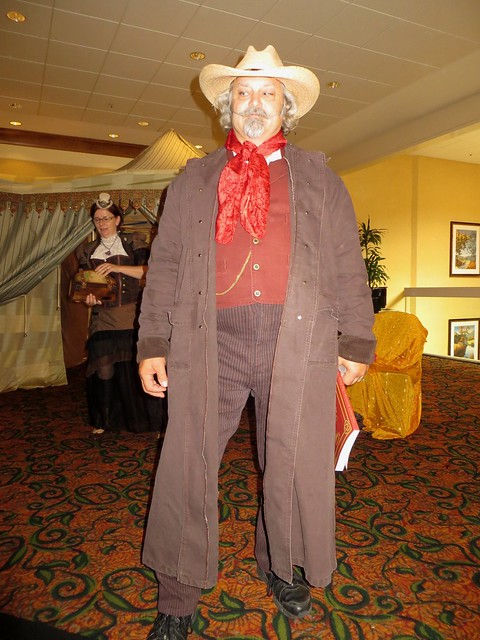 The music was center-stage at the evening concert events. Friday night featured the Wind-Up Cabaret, with belly dancing, a fashion show preview and performances by Dogwood, Frenchy and the Punk, John Sprocket and Unwoman, The main piece was the world premiere of a new musical, “Any Moment Now,” created by Nathaniel Johnston and Alyssa Rosenbloom. It told the story of a woman who was sent back in time to stop a robot apocalypse. She meets and falls in love with a man at a train station. Together, they work to stop the creation of a mechanoid army with the help of the man’s ex-lover. The musical also featured a duet whose characters resembled Dr. Horrible and The Doctor. The play was performed by many of the musical guests. 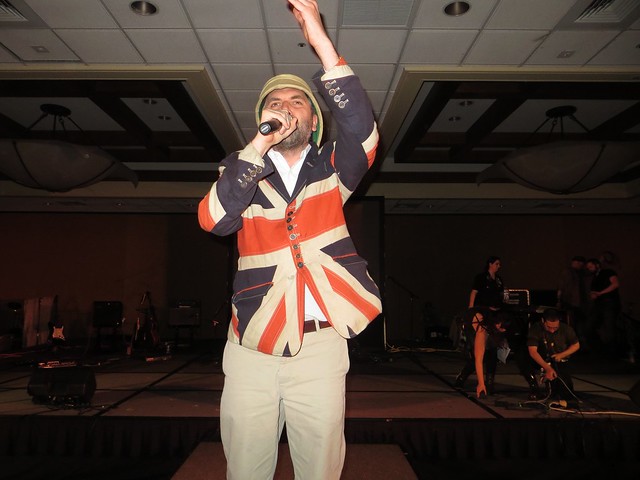 Saturday featured Emperor Norton’s Ball. Dance music was provided by DJ Persephone and DJ JsinJ. The main performances were local favorite Lee Presson and the Nails and electro-swing band Good Company. People were able to dance swing, waltz and blues throughout the night to sounds of powerful horns and covers of modern dance hits done in swing and jazz style. 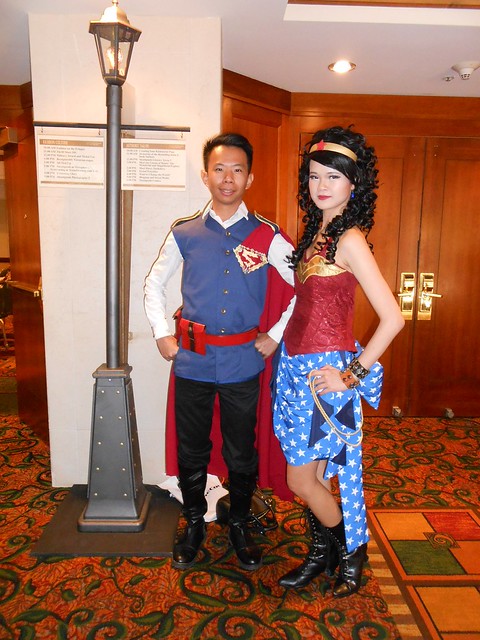 The Aural Alchemy Concert on Sunday featured an eclectic lineup. The popular Unwoman played haunting melodies on her electric cello. Jodi Ellen provided a mix of electronic dance, alternative rock and steampunk. Marquis of Vaudeville provided a psychedelic-inspired punk cabaret performance. Frenchy and The Punk provided an earthier sound. The evening was capped off by the neo-Victorian steampunk hip-hop stylings of Professor Elemental. 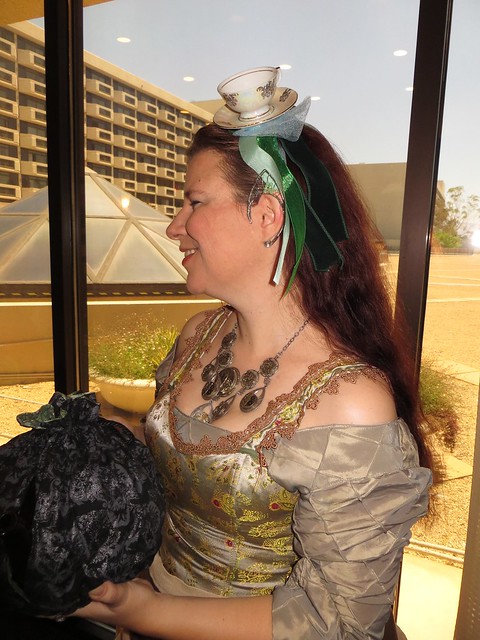 Costuming was on full display at Clockwork Alchemy. There were many Victorian outfits. There were a number of historical inspired costumes with cowboys, military outfits, coal miners, a steampunk version of Teddy Roosevelt and the Rough Riders and folk lore hero Pecos Bill. More adventurous people were mixing fashion from other countries like kimonos, choli and saris with the Victorian aesthetic. 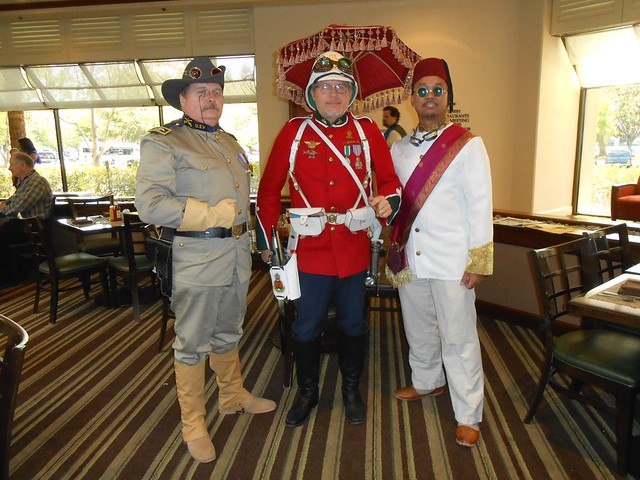 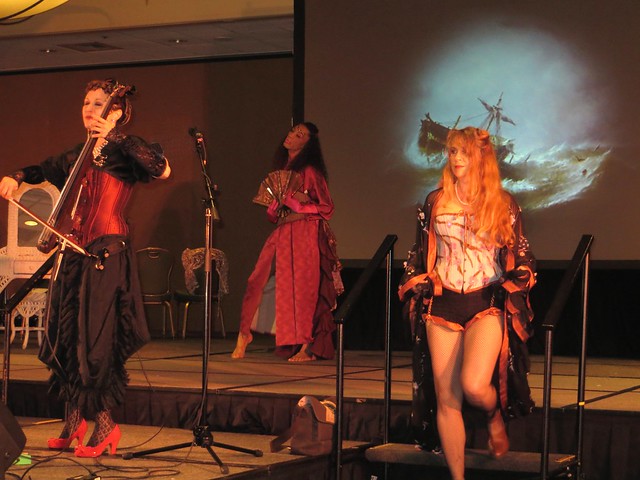 There were plenty of outfits of other popular characters including, Mad Moxxi from the “Borderlands” video game, a number of  Doctors from “Doctor Who”, Alice in Wonderland characters, Doctor Horrible, Captain Malcolm Reynolds and an amazing “BioShock Infinite” Cosplay group.

Clockwork Alchemy proved itself yet again in fun and entertainment with its variety of offerings in fashion, music, dance and art. There seems to be no limit of the appeal of the convention to a broad spectrum of interests and people. It should continue to grow and hold a special place on the calendar of convention goers for years to come.