During a trip to see my sister get married in Galveston, Texas, Jean and I were able to visit one of the most scientifically and historically important places in all of history. We explored the Lyndon B. Johnson Space Center at Space Center Houston. 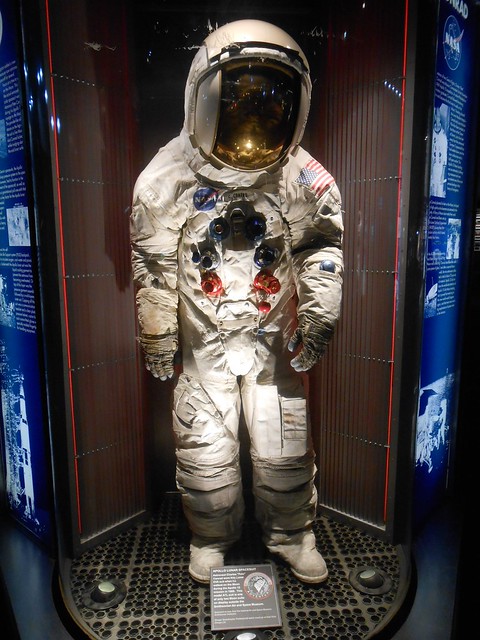 We were only in Texas for the weekend for the wedding and flew into Houston via the George W. Bush International Airport. After the plane landed, it taxied to the terminal by actually driving over the highway. 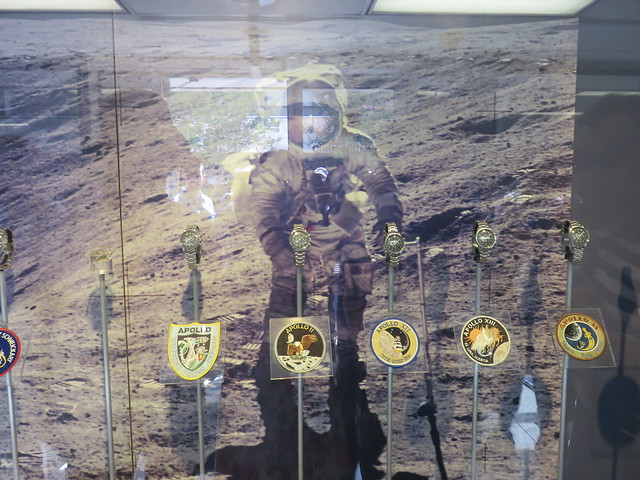 When we were getting the rental car, we realized that NASA was close to the airport. We decided that we would come to Johnson Space Center in the morning since the wedding was taking place in the evening. 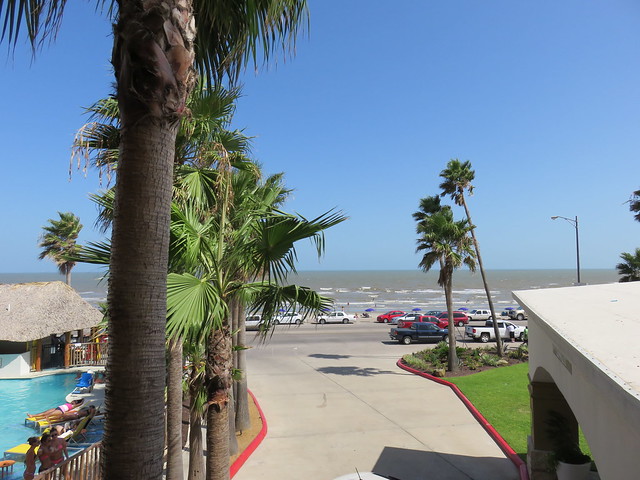 After picking up the rental car, we drove to our hotel on the beach in Galveston. The drive was about an hour in the early evening with hardly any traffic, which is unusual for Houston. We drove around the I-45 beltway loop and finally arrived at our hotel. The weather was warm but not hot. We ate at an open-air bar/restaurant right next to the hotel pool where people were having drinks from the bar. 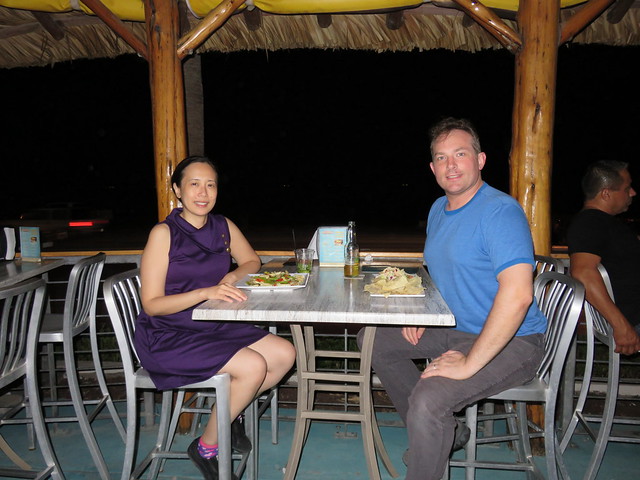 The hotel room had a view of the beach. The geekiest part of the room was the brand of refrigerator: Smeg. 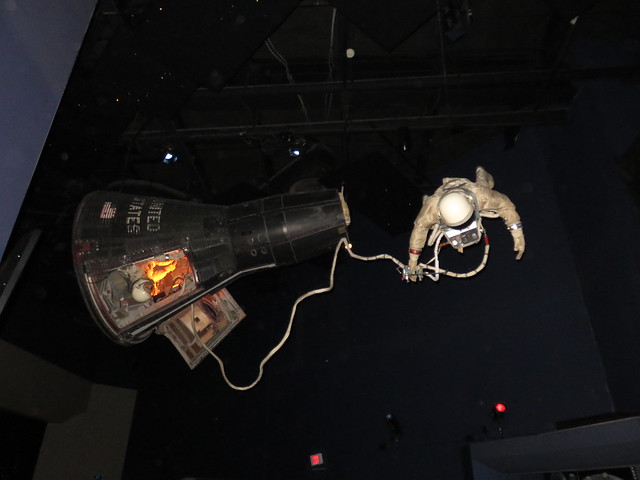 Once inside there were plenty of attractions. There was a space shuttle nose section that you enter and sit in the cockpit. There was a gallery of astronaut suits including the Apollo Lunar Suit, the Space Shuttle Extra Vehicular Activities (EVA) suit, an Apollo-Soyuz suit, the Apollo biological isolation suit, the RX-5 space suit, and Sally Ride’s fight suit. 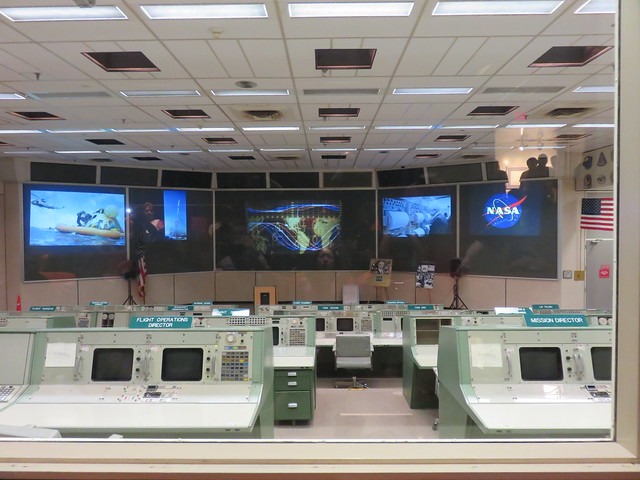 There were plenty of models with the International Space Station, Skylab, the Space Shuttle, a fully restored Galileo shuttlecraft prop from the original “Star Trek” series and capsules and rockets from the various early space flight and moon landing programs (Gemini, Mercury and Apollo). 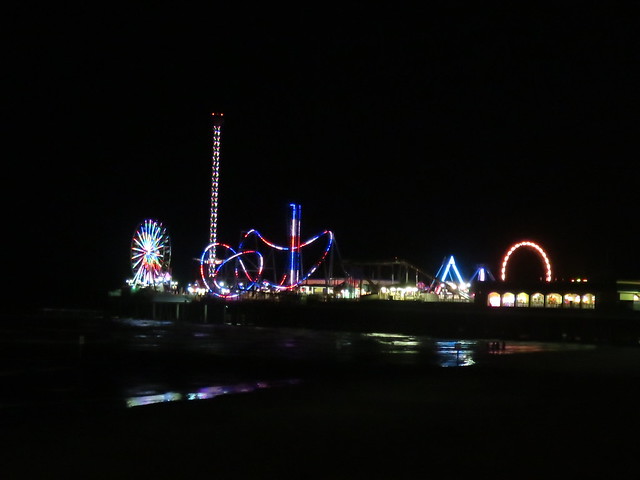 There were replicas of space station areas where you could walk through it for a sense of space. The Skylab recreation had dioramas of the famous footage of crewmembers eating floating food and tumbling in zero gravity. The International Space Station featured sleeping bunks and storage galleys with draws containing food and instruments. 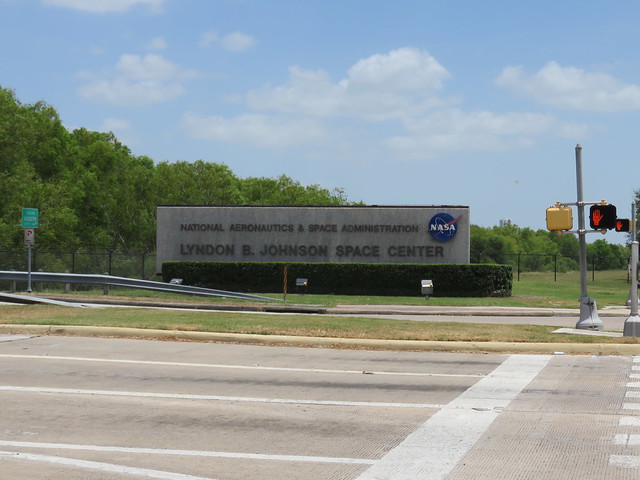 One gallery had displays of the moon landings, Gemini space walks and other space vehicles on display. Another gallery featured different types of moon rocks and lunar soil and a sample moon rock that could be touched. 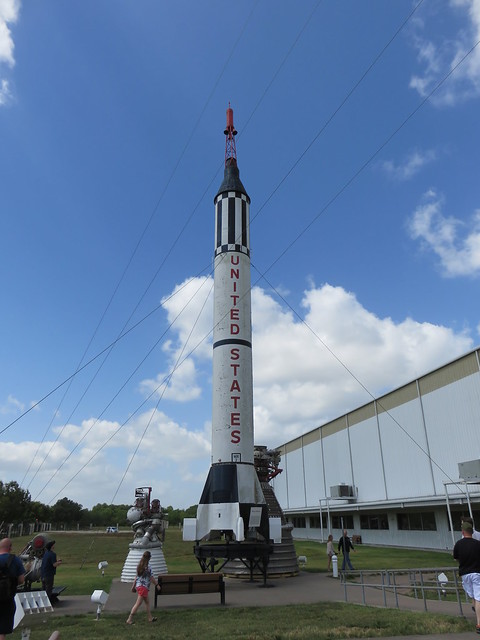 The main attraction of Space Center Houston was the tram tour. There was the choice between the Red Tour (the astronaut training facility and modern Mission Control) and the Blue Tour. We chose the Blue Tour as it contained the Historic Mission Control facility. Before we entered the tram, we had our photos taken for security purposes as we would be going into the actual NASA facility. The security photos were also used for photo mementos that could be purchased after the tram tour. 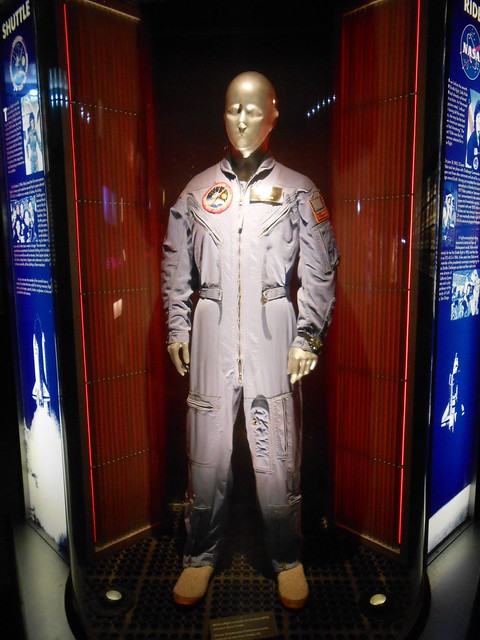 During the tram ride, the history of the site was explained from its beginnings as cattle grazing land to development of the research/training facility after donation of land by Rice University for the purpose. 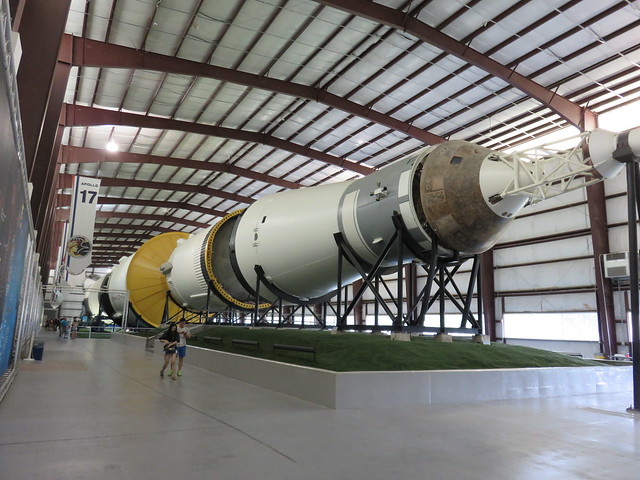 Our first stop was Historic Mission Control. The room is housed in Building 30, also known as Christopher C. Kraft, Jr. Mission Control Center. It is also the same building where the current Mission Control Center is located. Inside the lobby, there was a display all of the Apollo Mission patches and Omega watches. (Omega was selected to design watches that would work in space.) There were also models of Saturn launch rockets and lunar modules. 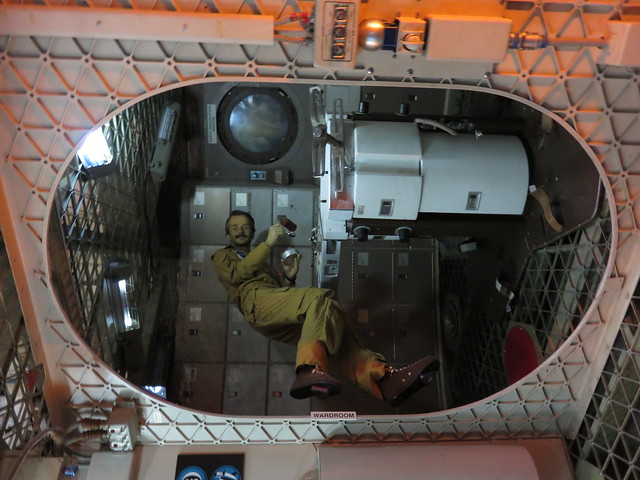 After traveling through a few stairwells, we arrived at the Mission Control Room. The room was restored back to the time of the Apollo missions. 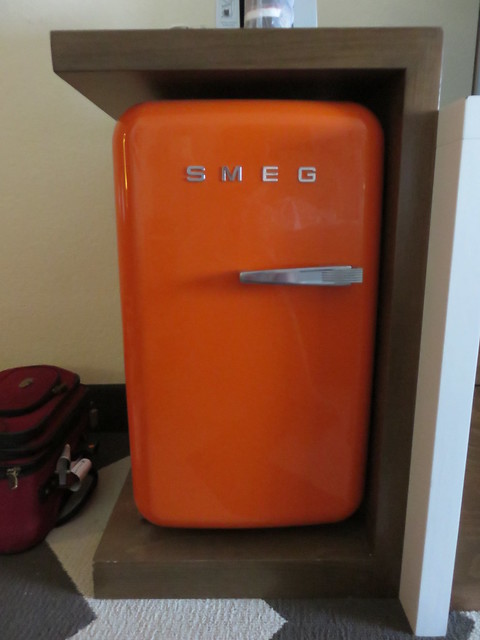 We were seated in a viewing area where VIPs such as representatives, senators and the families of the astronauts would watch the progress of the shuttle launches. The viewing room interior design felt like the late 1960s and included ashtrays on the seat backs. (The tour guide told a joke about how he had to tell kids that the ashtrays were not iPhone holders.) Through the viewing window, you could see the different command stations as they would have looked in the 1960s and 1970s. On the back wall were five different screens with video feed and a map on the central screen that tracked the progress of the space vehicles. Plaques from all of the missions were on the walls throughout the control center. 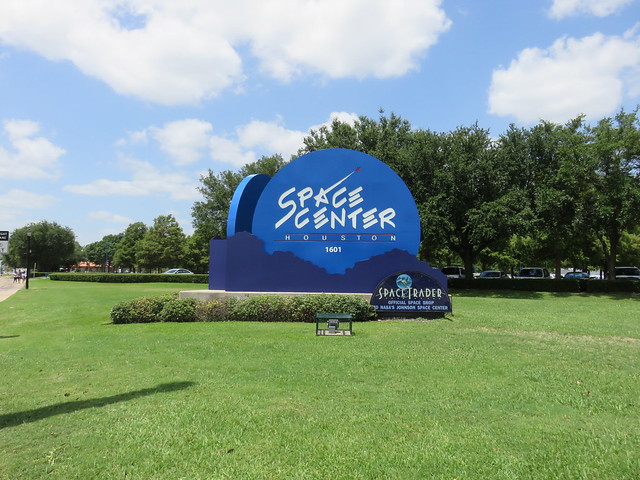 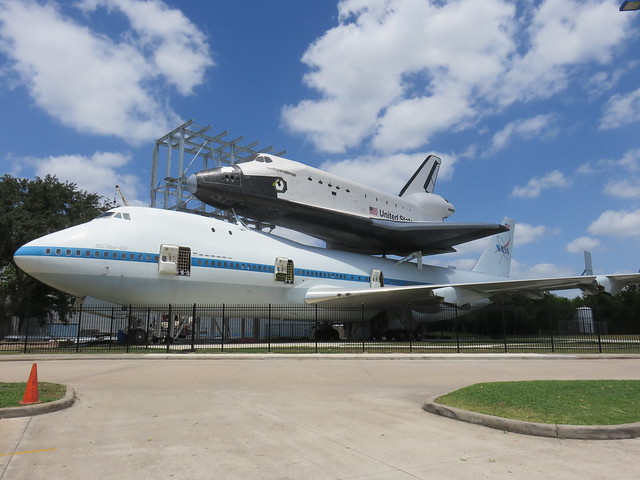 The next stop was Rocket Park. This was a small park that contained a “Little Joe II” test rocket, a Mercury Redstone rocket, a gangway used to enter the command module of a rocket, rocket engines and the Saturn V rocket. The Saturn V rocket was kept inside a building. It is one of the few remaining rockets from the Apollo program and was built from three different vehicles. 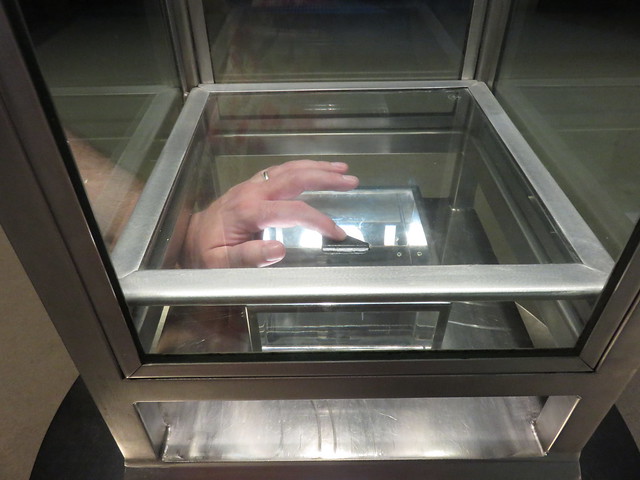 We eventually went back to Galveston for the wedding. My sister and brother-in-law were married in a historic downtown building. The wedding was done in a Zarathusti (Zoroastrian) ceremony. The Zoroastrian religion was founded by the Prophet Zoroaster (Zarathushtra) in Iran approximately 3500 years ago. The Islamic conquest of Persia forced Zoroastrians to migrate. Many settled in India about 1200 years ago. Zoroastrianism is the world’s smallest monotheistic religion with between approximately 124,000 and 190,000 people practicing worldwide.

The ceremony required everyone to cover their heads so topis and scarfs were available for people to wear. The ceremony started with a procession of women leading the groom to the stage and carrying a ceremonial tray of items to perform the achu michu (a blessing and protection ceremony). The bride’s mother circled items representing the Elements and good luck around the groom’s head and then smashed them to remove evil and protect him. A piece of sugar was then placed in his mouth to encourage sweet talk. The mother cracked her knuckles on her temple to further remove any ills. A red mark was then made on the groom’s forehead and rice pressed to it. The procession and achu michu was then repeated for the bride.

When the bride and groom were both seated, the Ara Antar (marriage knot) was performed to create a union. The couple was separated by a cloth signifying separation up to the point of the marriage ceremony. The priest placed the couple’s right hands together while he wrapped a multi-stranded twine around their hands seven times and recited the Ahunavar (a sort of marriage prayer) seven times. The couple was each given rice in their left hand and then the twine was wrapped around the couple seven times while the Ahunavar was recited seven times. The union is then considered complete and cannot be easily broken. The cloth was dropped and the couple threw the rice at each other. Whoever throws the rice first is said to show that they will be foremost in loving and respecting the other.

The priest then followed with Admonitions which include advice about one’s behavior in life and prayers to Ahura Mazda (God) while showering rice and rose pedals at the couple. The priest completed with a recital prayer to promote long life, health and well-being.

After the wedding, we walked along the Seawall which was constructed to help head off water pushed onto Galveston Island during hurricanes that had previously created widespread damage and flooding. We visited the Galveston Island Historic Pleasure Pier, an amusement park with games, rides and items for purchase.

We had to leave for the airport the next day and drove back to Houston. This time we drove through the center of Houston and saw the downtown area from the highway. We arrived at the airport and then took the plane back home.