In conjunction with the 200th anniversary of the birth of Ada, Countess of Lovelace, the Computer History Museum hosted Adafest, an event for the opening of the Ada Lovelace exhibit on December 13, 2015.

The event featured a demonstration of the Babbage Difference Engine created from the original designs even though the machine was never actually realized. A docent dressed as Ada from one of the famous portraits of her gave facts and hosted the demonstration. Other docents

There were also several events throughout the day. There was a Steampunk Marketplace featuring local artisans and sellers. A number of activities were scheduled for kids to get hands-on experience with computer code. April Chu read from here graphic novel “Ada Byron Lovelace and the Thinking Machine” and provided art demonstrations. There was a screening of the documentary “Calculating Ada: The Countess of Computing.” A presentation of the winners of the “Letters to Ada” competition was presented where girls were invited to answer the question of what Ada Lovelace would find interesting in the 21st century. The final event was a Victorian costume contest.

The exhibit, “Thinking Big: Ada, Countess of Lovelace” was the centerpiece of the event. The exhibit featured documents and paintings of her childhood including her connection to the poet Lord Byron, her education including teacher Augustus De Morgan, and her professional work with Charles Babbage. 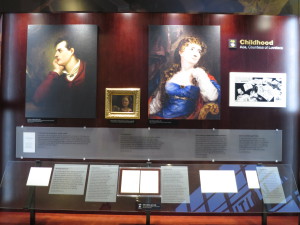